A Celebration of Life and Death: Día de Muertos in Mexico

Día de Muertos or ¨the Day of the Dead¨ is a special Mexican tradition dedicated to honoring the lives of dearly departed souls. This holiday is celebrated at the beginning of November in Mexico and other parts of the world, including Latin America and parts of the United States with a large Latino population. While the name of the holiday sounds a bit gloomy, it is actually a time of joyous celebration that welcomes back the souls of those that are no longer here on earth for a brief reunion that includes food, drink, and remembrance. Keep reading to learn more about Día de Muertos, how it is celebrated, and why you should visit your home away from home during this festive holiday. 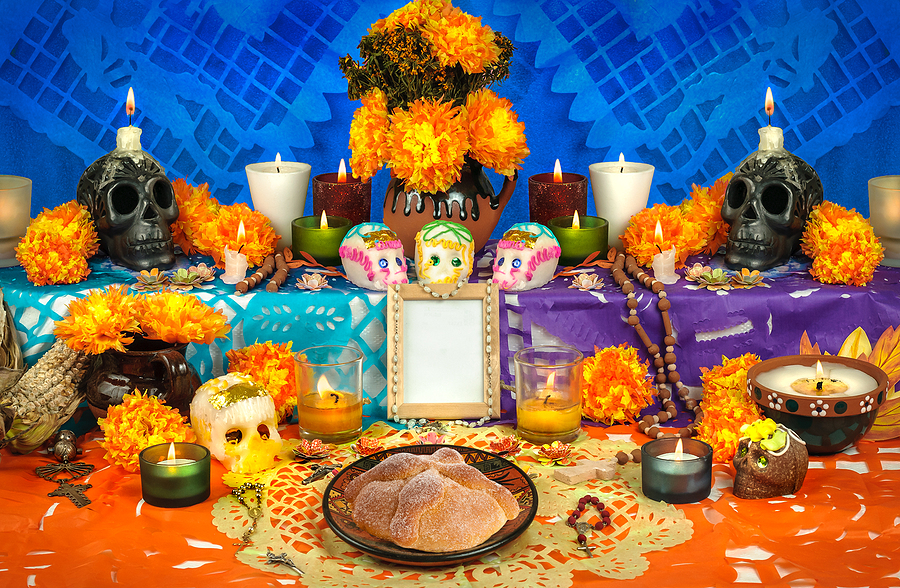 What is the Day of the Dead?

The Day of the Dead is an important celebration in Mexico that was declared an Intangible Cultural Heritage of Humanity of Mexico by UNESCO (The United Nations Educational, Scientific and Cultural Organization) in 2008. It is a time of year dedicated to remembering loved ones who have passed on. It is thought that during this holiday the souls of the dead get a special pass to cross over from the spirit realm to the mortal world in order to reunite with their loved ones.

This concept inspired the 2017 Pixar animated film “Coco”  released by Walt Disney Pictures. This stunning film has won numerous awards including an Oscar and is an emotional story of a young boy named Miguel who is accidentally transported to the Land of the Dead where he seeks help to return to his family.

An interesting fact about the Day of the Dead is that the opening scene of the 2015 James Bond film “Spectre” features a Día de Muertos parade in Mexico City. This sparked demand from tourists to attend the parade that had been non-existent up until that point. Mexico City hosted its first Day of the Dead parade on Saturday, October 29, 2016, and since then it has become an annual tradition. The parade closely resembles the one depicted in the film and even utilizes some props and costumes from the film set. 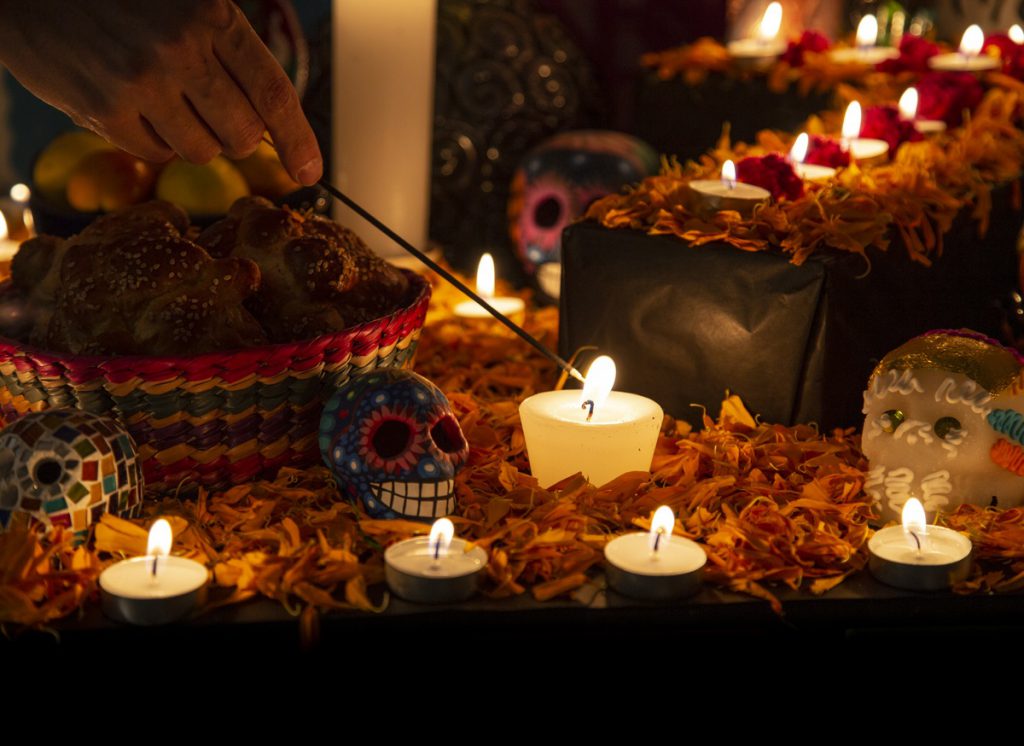 What are the Origins of this Holiday?

Día de Muertos is a blend of pre-Columbian and Spanish customs. This holiday’s earliest roots date back 3,000 years to the Aztec people in parts of central Mexico. The Aztecs held a month-long festival in August to pay tribute to the spirits of the dead as well as the rulers of the underworld: Mictecacihuatl and her husband, Mictlantecuhtli.

During Spanish rule, after the Spanish conquered the Aztec empire in 1519, the European influence of Catholicism was widespread and the Catholic Church rejected this original celebration since it did not align with their beliefs.

As a result, the pre-Hispanic custom of venerating the dead became fused with the Catholic tradition of celebrating “All Saints’” and “All Souls’” days and the holiday is now celebrated on two consecutive days that are of importance to the Catholic Church – All Saints’ Day and All Souls’ Day, making it a holy holiday. Today, many Mexican Catholics practice a unique version of this Roman Catholic tradition that incorporates pre-Hispanic traditions. 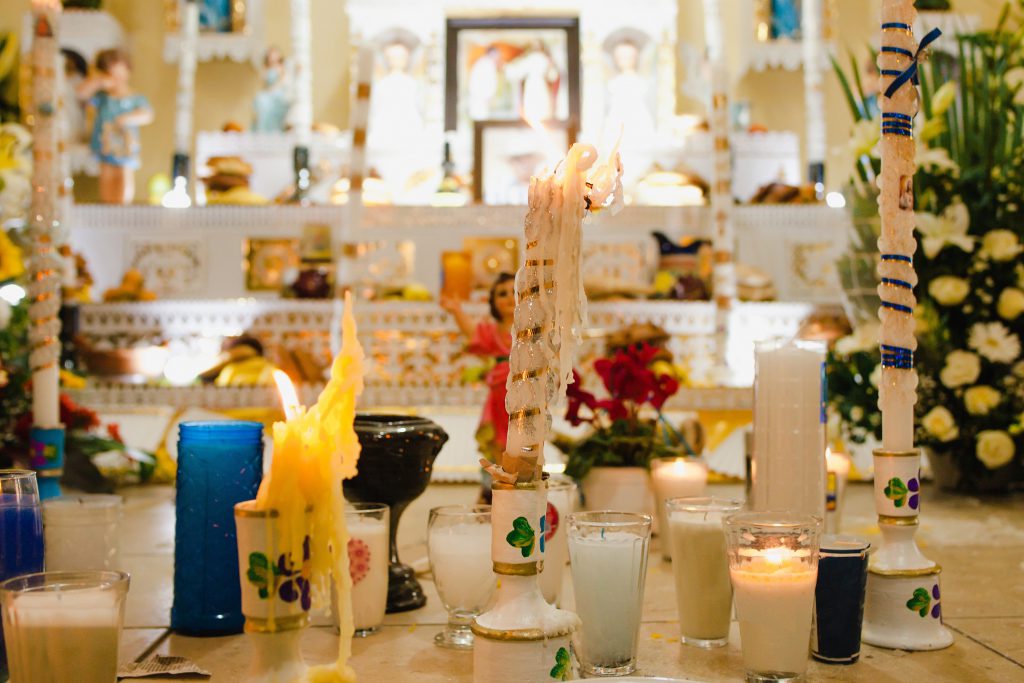 When is Día de Muertos Celebrated?

In the 16th century, the Catholic Church moved the dates of the Day of the Dead celebration to the Catholic dates that commemorate All Saints’ Day and All Souls’ Day. This fusion of indigenous customs and non-official Catholic practices are what is now known as

Día de Muertos, which takes place on November 1 and 2.

All Saints’ Day (November 1St) is a day dedicated to children who have died, which is celebrated by visiting the cemetery to commune with deceased children, decorating their graves, lighting candles, leaving flowers and gifts on their graves, and paying a heartfelt tribute to them.

All Souls’ Day (November 2nd) is a day dedicated to the departed souls of adult friends and relatives. To celebrate All Souls’ Day, the living honor the souls of the dead in much the same way. They create altars, light candles, and leave flowers and gifts on the tombstones of things the deceased enjoyed in life. 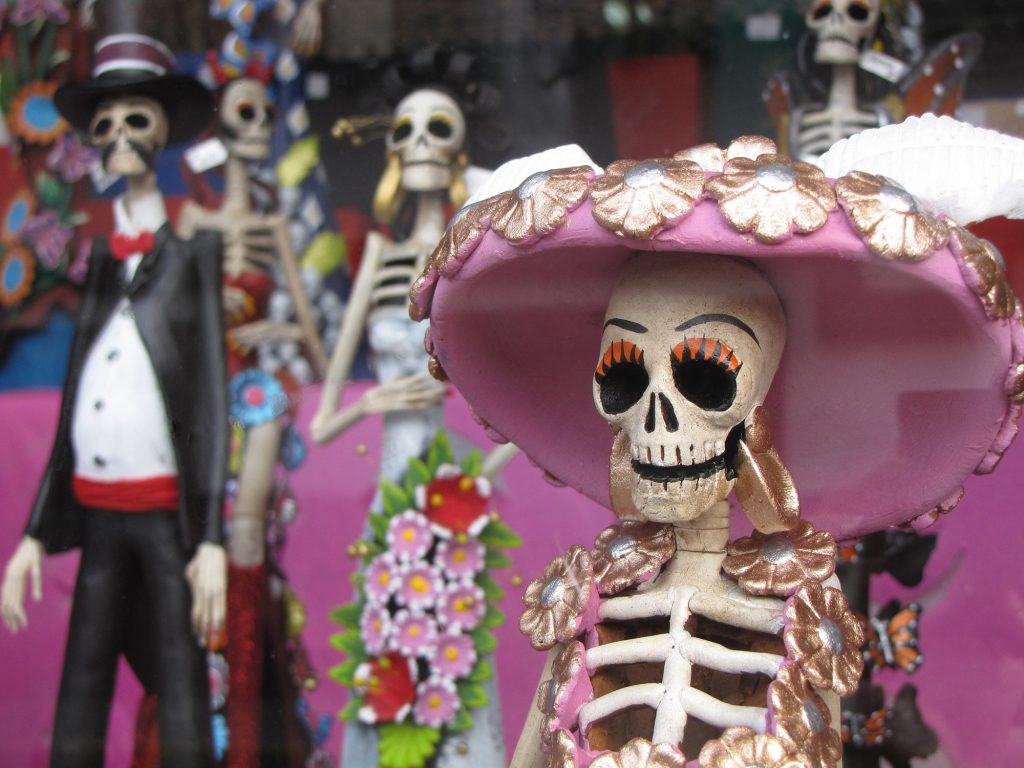 How is it Celebrated in Mexico?

The most traditional way to celebrate the Day of the Dead in Mexico is to visit the cemetery. Families gather together at the cemetery and clean the graves preparing for the spirit to come. While this may sound morbid, it is actually a lovely celebration of life. The tombstones are adorned with many colorful flowers including marigolds, and friends and relatives gather together much like a family reunion and they tell stories and share anecdotes about the deceased. Some families bring grills to the cemetery and enjoy a big feast with the favorite food and drinks of the deceased. They decorate the tombstones with photographs, and other objects, and they leave offerings for the dead. For children, they typically leave sweets and for adults, they leave items such as cigars or alcohol. Later in the night, bands are hired to come and perform and people dance and party in the cemetery with the visiting souls.

People also build altars or “ofrendas” in their homes where they leave offerings. They put up photographs, light candles, place marigold flowers (whose strong scent is thought to guide the souls home), as well as light copal incense and place a sugar skull  or “calavera de azúcar”. Some families also place a rosary, a Christian crucifix, or an image of Mexico’s patron saint, the Virgin of Guadalupe, on the altar. It is also a common practice to place the altar on a table that is covered in white cloth and decorated with colorful tissue paper cut in designs called “papel picado”.

It is also customary to see the iconic figure of La Calavera Catrina, depicted as a female skeleton wearing a fancy hat, placed on the altars as a figurine. The original sketch was created by José Guadalupe Posada and since then it has evolved to become a representative figure of the Day of the Dead celebrations. 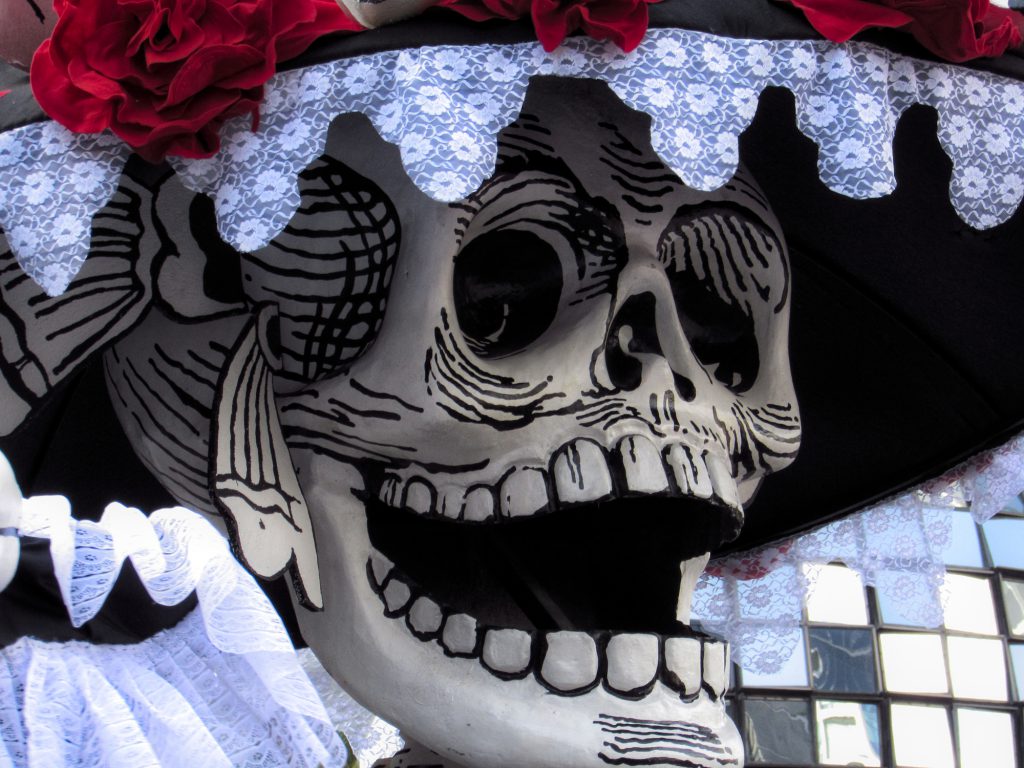 Sometimes people go to the cemeteries dressed as La Catrina, and her male counterpart, El Catrin, who together represent the face of death. They are skeletons dressed in elegant clothes. While some people get fully dressed up, others just paint their faces. 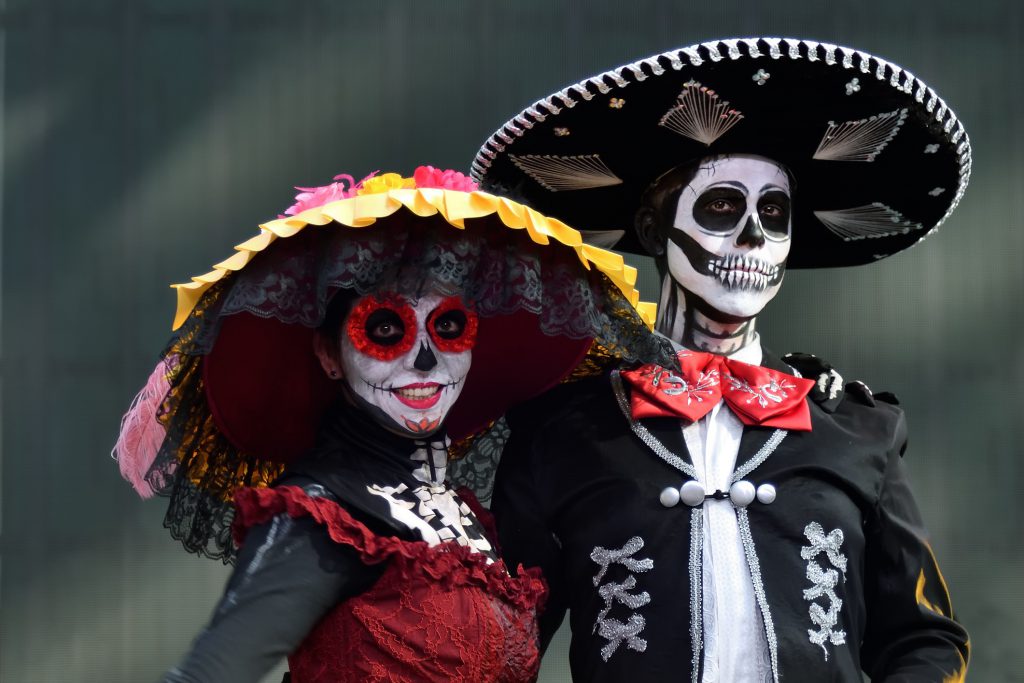 Another significant part of this tradition is a special sweet bread called bread of the dead or  “pan de muerto”. The type of breads differ depending on which region you visit. In Mexico City, it is common to find this bread in the shape of a butterfly, since it was thought that girls turned into butterflies after they died. The most popular kind of pan de muerto is round, covered in red or white sugar, and strips that represent bones. 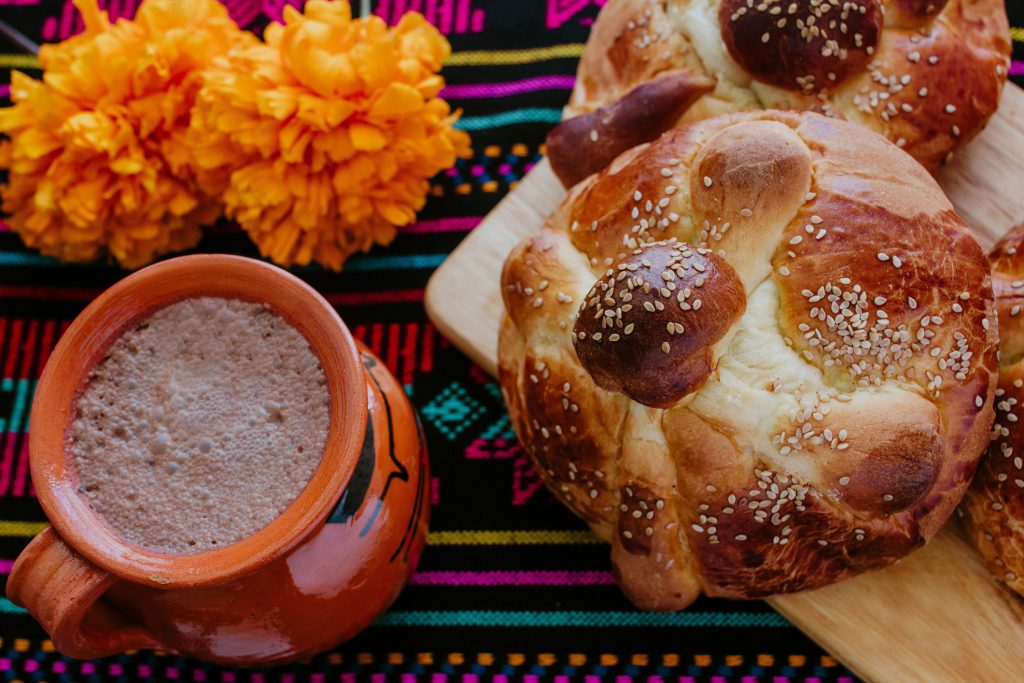 The Day of the Dead celebration is a beautiful tradition because it creates a space to reunite and commune with the dead and brings continuity between life and death, which is part of its fascination, and it reminds us of our own mortality. In some cultures, death is viewed as a bad thing, but for Mexicans this celebration of death becomes a continuation of life.

Day of the Dead Events at Our Resorts

We invite members staying at all Villa Group Resorts to learn more about Mexican culture by experiencing Día de Muertos traditions for themselves. Each resort will be doing something special to honor the souls that are no longer with us.

On November 1 and 2, you can enjoy festive Mexican buffets with live performances in our restaurants, admire altars with sugar skulls created by the resort staff, and observe altar decorations made for loved ones.

If you are planning to vacation in November, you can acknowledge the special day along with your loved ones in one of our beautiful resorts. It will be a celebration of life like you have never seen before! 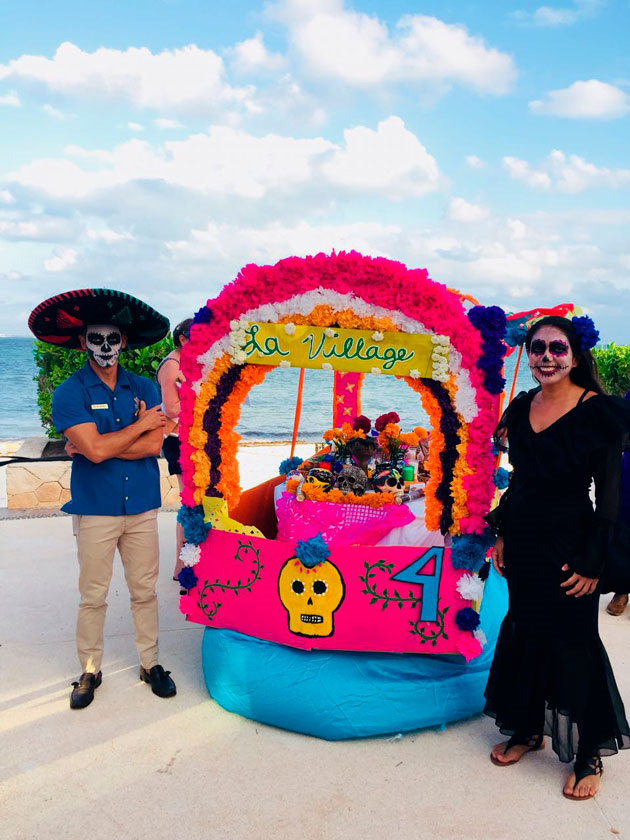 Puerto Vallarta – To see an impressive display of altars, on November 1st and 2nd visit Plaza de Armas, located in the main square across from the Malecon and next to City Hall. You will see many traditional altars set up. Then cross the street and walk along the Malecon, which transforms into a boardwalk of giant, fancifully decorated Catrins and Catrinas, which you will not want to miss seeing.

Sayulita, one of the best beach towns in Mexico, is another great place to visit during the Day of the Dead celebrations. This hip town is just over an hour’s drive from Villa del Palmar Puerto Vallarta and a 45-minute drive from Villa del Palmar Flamingos. The night walk starts in the main plaza and ends at the main cemetery located next to Playa de los Muertos. At midnight the cemetery comes to life. A live band performs and people dance and the celebration turns into a big party. 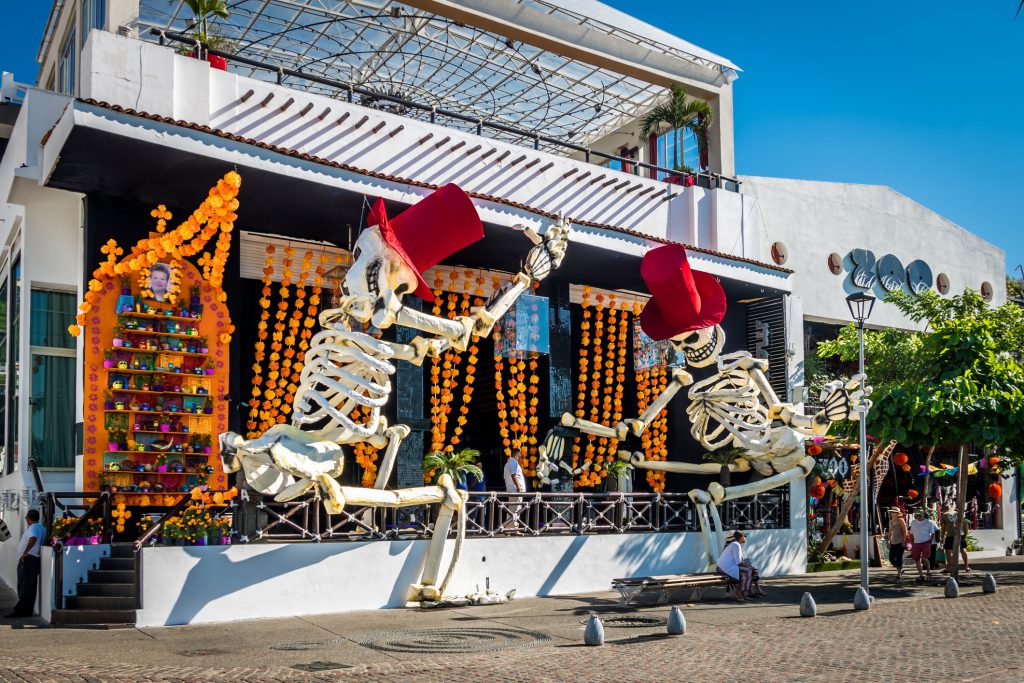 Cancun – Head to Playa del Carmen and attend the Life and Death Traditions Festival happening over four days, from October 30 to November 2 at Xcaret Park, a theme park with many cultural attractions. This festival offers an extensive program of activities that combine ancestral traditions with contemporary artistic expressions. You will also have the opportunity to enjoy traditional Mexican cuisine. 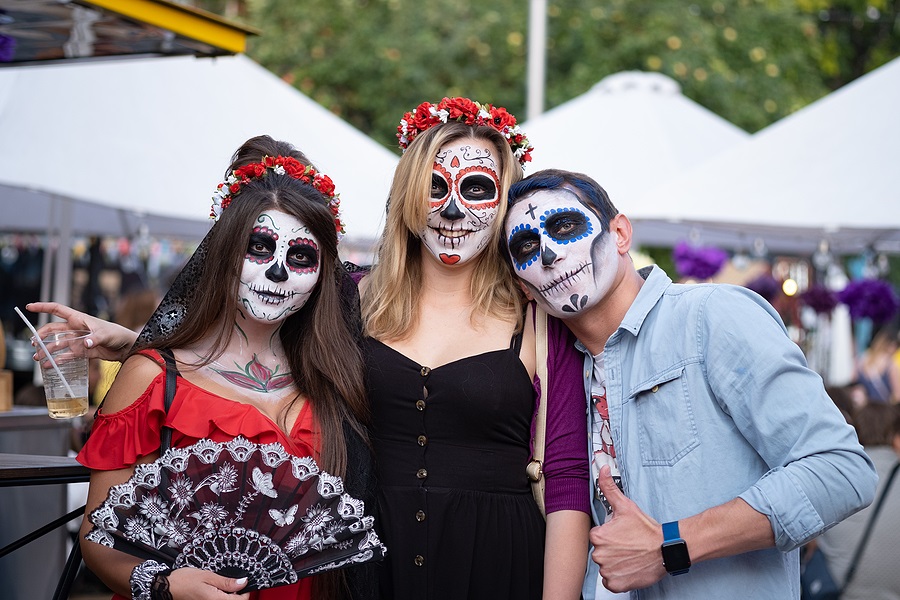 Loreto – Head to Loreto’s historic downtown on November 1 and 2, which will be decorated in papel picado and there will be altars on display. Musicians and dancers wearing elaborate costumes will perform for the crowds. 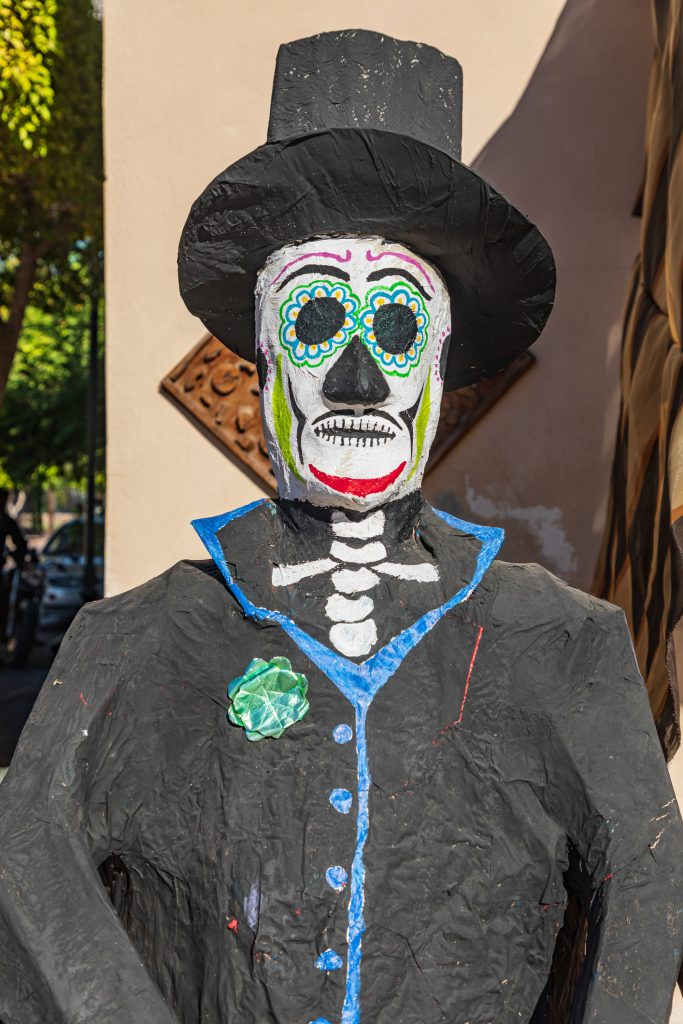 Make sure to check out the local celebrations and come to experience Mexico’s wonderful Day of the Dead traditions. Ask at the resort for more information about specific events and times closer to the date.

Don’t miss out on this holiday of festive celebration and sacred remembrance!