Bull Shark Diving Season in Cancun: What to Know

Looking for something to add to your Cancun vacation bucket list? Try diving with bull sharks for a unique experience unlike any other. Keep reading to learn more about bull sharks and why you should consider partaking in a tour to observe these marvelous creatures during your next Cancun vacation.

What are bull sharks?

The bull shark is a unique creature. They are one of the most widespread species of sharks, which can be found in the waters of all the oceans (both freshwater and saltwater). They generally hang out in the ocean but are known to venture closer to the water’s surface at times as they are curious animals and naturally enjoy shallow coastal waters.

The bull shark received its strange name for its ferocious, unpredictable temper and ability to live and hunt. They live mainly in coastal waters off Latin and North America, but they are also found in Indian waters. They love fresh water and because of that they are attracted to the freshwater cenotes that run into the sea in Cancun.

Bull sharks are distinguished from other sharks by their large body-width-to-length ratio, which gives them a robust appearance. Like other fish, bull sharks are counter-colored or dark on top and light on the underside.

The body of a bull shark is quite large. An adult female is sometimes over 4 meters (13 feet) long. Males are slightly smaller, with a body length of about 2.5 meters. In terms of weight, their mass can reach up to 300 kilograms, or 660 pounds.

Bull sharks are characterized by their immense strength and incredible speed. They have amazing saw-like jaws that scare other marine animals from getting near them. They also have a short and round snout, small eyes, and a dorsal fin shaped like a triangle. 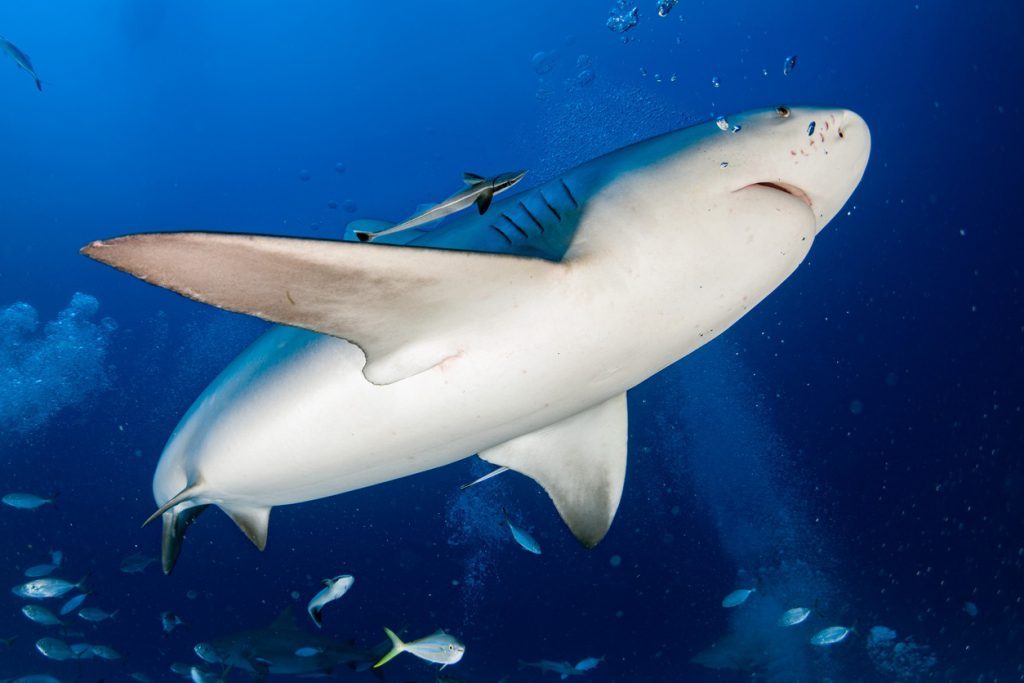 Bull sharks are generally solitary hunters. They are not picky eaters. They generally eat mostly fish, but can also eat other shark species, marine mammals, birds, and turtles.

If you see two bull sharks coming together, it is most likely to mate as they are very solitary creatures. Female bull sharks give birth to a litter of up to thirteen live bull sharks after a ten-to-eleven-month pregnancy period. Most bull sharks live twelve to sixteen years.

The kidneys of bull sharks have adapted to keep salt in their bodies even when they are in freshwater. Scientists are still studying bull sharks to figure out why they developed this unusual ability, but it is a unique fun fact to be aware of.

The International Union for Conservation of Nature (IUCN) lists bull sharks as ‘near threatened’ creatures. Because of their coastal distribution, bull sharks are more at risk from pollution and habitat degradation than other species.

Bull sharks live in large numbers off the reefs of Cozumel. These majestic sharks are fascinating to watch because of their large fins, and how quickly they navigate through the water – despite the fact that scientists believe bull sharks can’t see well or can only see in black and white. In Cancun, you have the unique opportunity to dive alongside these beautiful animals and observe all of their unique attributes up close!

When planning a dive with bull sharks in Cancun, keep in mind that the swimming season with these marine animals lasts from November to March each year. This is the time period when bull sharks arrive in the area.

When to stay in Cancun during the bull shark diving season 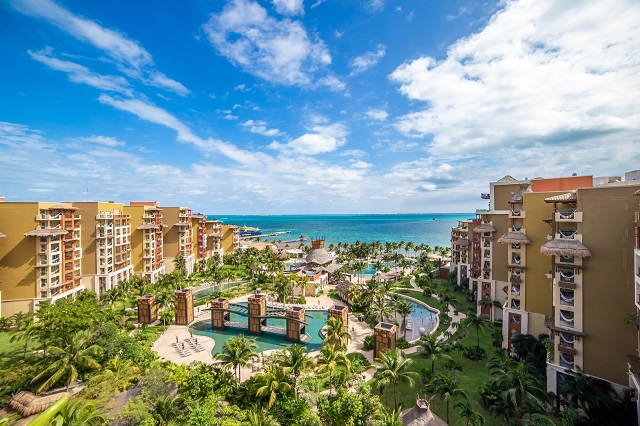 To see these unique creatures for yourself, visit Cancun between November and March and arrange a bull shark diving tour. Diving with bull sharks is unlike any other experience and will be a vacation memory that you will remember forever. But don’t take our word for it, come experience it for yourself. We will be happy to welcome you back to your home away from home.