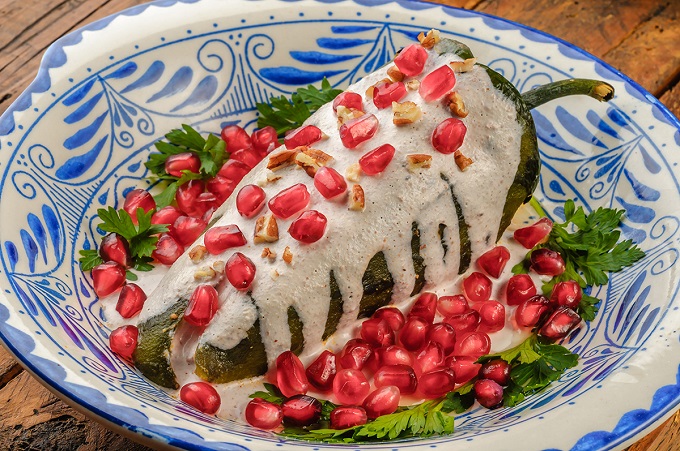 Mexico is rightfully famous for its delicious cuisine, and when you are planning a trip to Villa del Palmar Cancun, you know you can look forward to amazing dining experiences. September is a particularly special month in Mexico, where the patriotic spirit is at a fever pitch as its residents celebrate the country’s hard-won independence while gearing up to the big Independence Day event on the eve of September 16th. Whether you consider yourself to be a foodie or not, September is the perfect time to discover the incredible gastronomy of Mexico and celebrate Mexico’s independence to boot.

The background of Mexico’s Independence, often known as “El Grito” (the Shout) is fascinating. The beginning of Mexico’s Independence is attributed to an uprising that took place on the morning of September 16, 1810 in the town of Dolores, Mexico. Led by a priest, Miguel Hidalgo and captains Ignacio Allende and Juan Aldama, history books claim that the people of the town were incited to rise up against the Viceroyalty of New Spain chanting: “¡Viva la Virgen de Guadalupe! ¡Abajo el mal gobierno! ¡Viva Fernando VII!” (Long live the Virgin of Guadalupe! Down with the bad government! Long live Fernando VII!) hence where today’s tradition of El Grito originates.

Government officials and mayors across Mexico, including the nation’s president, imitate this call to independence each year with El Grito on the eve of September 16 in commemoration of this first act of resistance. Eleven years after the Dolores uprising, Mexico was officially recognized as an independent state, claiming its independence from Spain in 1821. Today, the whole month of September is dedicated to patriotic fiestas throughout Mexico with the main celebrations taking place between September 15 and September 16.*

In honor of this festive time of year, ZAMA restaurant at Villa del Palmar Cancun will be featuring one of the most iconic traditional dishes in Mexico: Chiles en Nogada throughout the month of September! This scrumptious specialty dish fuses unforgettable flavors with an artistic presentation which represents the colors of the Mexican flag, which are green, white and red. Poblano chiles are stuffed with a savory-sweet meat filling, which are then smothered in a creamy walnut sauce and topped with a vibrant sprinkling of pomegranate seeds and parsley. This dish originated in the state of Puebla and has long been a favored dish when celebrating Mexico’s independence. Our talented team of Food and Beverage experts, from the chefs to the wait staff, cannot wait to make every meal you enjoy at the resort a delectable experience.

Restaurants for all tastes

Of course, you won’t want your culinary journey to stop with Chiles en Nogada, so be sure to enjoy meals from each of the incredible eateries at the resort while you are on vacation, too: La Casona STK, featuring a menu of bistro favorites and fine cuts; Hiroshi, featuring Japanese and East Asian specialties; Davino, featuring tasty Mediterranean classics; Caprichos, featuring a range of international flavors; and Bite Bar, featuring casual meals and snacks. With so many dining options on offer in one place, you are sure to delight in amazing meals throughout your stay.

You won’t want to miss this delicious opportunity, so book your September stay and treat yourself to Chiles en Nogada!

* It is worth mentioning here that 5 de Mayo is not Independence Day for Mexico as many north of the border believe, but rather celebrates the Battle of Puebla, which took place during the second French intervention in Mexico.

Celebrate the Fourth of July at Villa del Palmar Cancun

Make sure this account has posts available on instagram.com.